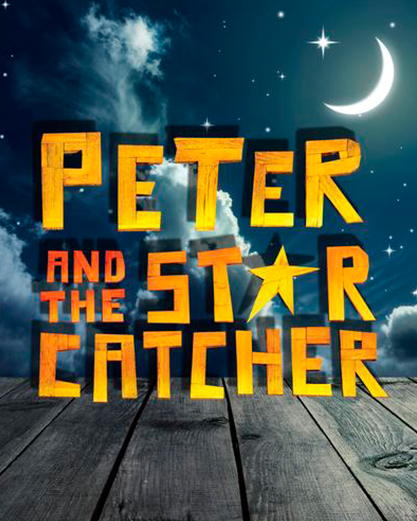 Peter and the Starcatcher

Before Wendy… before he was Captain Hook… before a boy was given the name Peter Pan… and before there was a Neverland, there was a Starcatcher apprentice named Molly, a pirate named Black Stache, and a nameless orphan…and they are about to be thrown together in a perilous (and wildly hilarious) adventure on the high seas. But, of course none of this actually exists, unless you are prepared to use your imagination.

Peter and the Starcatcher is an action-packed journey through Neverland that brings pirates, mermaids, orphans, and secret agents of the Queen together on the high seas. Written by Rick Elice (Jersey Boys), based on the bestselling novel by Dave Barry and Ridley Pearson, Peter and the Starcatcher reveals the origins of Peter Pan, Wendy, the Lost boys, their piratical nemesis, Captain Hook, and a far-off place known as Neverland.

The five-time Tony-winning show that The New York Times called "the most exhilarating storytelling on Broadway in decades," Peter and the Starcatcher is the swashbuckling prequel to "Peter Pan." Inventive stagecraft and an imaginative story come together to reveal the origins of "the boy who wouldn't grow up" in this madcap music-filled adventure, weaving an enchanting coming-of-age tale that's bound to appeal to your entire crew.

Suitable for all ages!