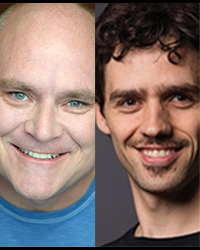 Improv with Billy and Kent

× Billy Tierney and Kent Loomer, both former members of the popular improv group, Rooster, re-unite at Whidbey Island Center for the Arts for one show only. The show will feature both Tierney and Loomer playing multiple characters within a world created on the spot in front of the audience. Their sincerity, ingenuity, and creativity will be used as the recipe for success in a show that will only exist for one night, not to be replicated or seen again. There is an 8% chance they will be joined on stage for the evening’s performance by none other than Mr. Ryan Stiles.