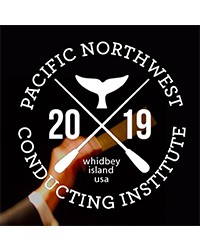 The Festival Concert will feature PNWCI 2019 Conducting Fellows. Repertoire to be announced.

Diane Wittry has taught International conducting courses and workshops in Bulgaria and Ukraine, as well as the New York Conducting Institute, the International Conductor's Institute, the South Carolina Conductor's Institute, her own Beyond the Baton Conducting Seminars and the Pacific Northwest Conducting Institute. An avid supporter of young conductors and conductor training, Wittry is a member of the National mentoring committee of the Conductor's Guild. An award-winning author and scholar, her book, "Beyond the Baton", (Oxford University Press, 2007) was nominated for a Pulitzer Prize and has become a standard, both nationally and internationally, in the field. Her most recent book "Baton Basics - Communicating Music Through Gestures" (Oxford University Press, Dec. 2014) is being utilized by conducting classes across the country.