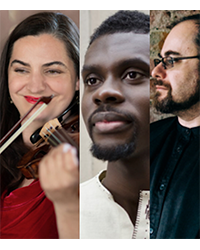 × As of October 7th, ticket holders will only be admitted into the theatre with either proof of vaccination and/or a negative test that was taken within 72 hours of the event.

Per Governor Inslee’s most recent mandate, we also require that all visitors wear masks at our indoor performances, regardless of vaccination status.

Our focus remains the safety of our audiences, artists, staff and greater community - protocols will continue to evolve as needed. You can learn more by clicking here.

Experience the music behind the turbulent crossroads of politics, the rum industry, and the transatlantic slave trade in the Caribbean, South America, and Europe. This unique program includes songs by Black British composer, abolitionist, and merchant Ignatius Sancho as well as by José Mauricio Nuñes Garcia, grandson of sugar cane plantation slaves. Hear a violin sonata by Caribbean-born Joseph Boulogne, Chevalier de Saint Georges, who in his later life fought for Haitian independence, as well as works by 19th and 20th century Créole composers.

This is a LIVE EVENT! We will be adhering to all state mandated safety protocals, including masking and social distancing.