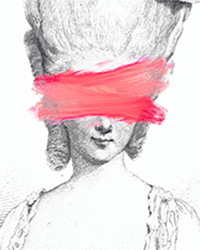 × As of October 7th, ticket holders will only be admitted into the theatre with either proof of vaccination and/or a negative test that was taken within 72 hours of the event. Per Governor Inslee’s most recent mandate, we also require that all visitors wear masks at our indoor performances, regardless of vaccination status.

Our focus remains the safety of our audiences, artists, staff and greater community - protocols will continue to evolve as needed. You can learn more by clicking here.

Four beautiful, badass women lose their heads in this irreverent, grrrl-powered comedy set during the French Revolution. Playwright Olympe de Gouges, assassin Charlotte Corday, former queen (and fan of ribbons) Marie Antoinette, and Haitian rebel Marianne Angelle hang out, murder Marat, and try to beat back the extremist insanity in 1793 Paris. This grand, dream-tweaked comedy is about art and activism, feminism and terrorism, and compatriots and chosen sisters.

This is a LIVE EVENT! We will be adhering to all state mandated safety protocals, including masking and social distancing.